Zoe Shannon is the 5-year-old daughter of Jim Shannon and Elisabeth Shannon and is the younger sister of Josh Shannon and Maddy Shannon. She travelled illegally to Terra Nova on the Tenth Pilgrimage.

Although Elisabeth's medical training secured the family a spot on the Tenth Pilgrimage, a secret involving Zoe momentarily endangers their place in Terra Nova.

Zoe was born in 2143 in rural Cooke County, Illinois. Her mother gave birth at a colleague's house. Because she was the third of three children, her existence was illegal, and the rest of the family was forced to hide her from the outside world. Jim was subsequently arrested after he attacked investigating officers, who believed his family had violated the Population Law in 2147.

Zoe was smuggled into Terra Nova in Jim's backpack, and was nearly killed by soldiers when they prepared to use hunting knives to open the backpack. Once she was let out of the backpack, this marked the first time she had seen Jim in two years. Although Jim initially believed that Zoe had forgotten who he was, she would indeed remember him by calling him "daddy". Zoe begins to adjust rather quickly to her new home and surroundings.

Zoe eventually managed to fall asleep in her own bed once her father had moved back in with them. When a group of pterosaurs attacked Terra Nova and several of them managed to get inside the Shannon house, Zoe took refuge under some furniture and was almost attacked by one of the pterosaurs until her brother rescued her. Zoe got a cold and was taken out of school by her sister to be taken to the infirmary. Zoe later made two plush dinosaur toys. ("Instinct", "What Remains")

Zoe welcomed Leah Marcos to the Shannon home showing her some of her dinosaur toys and drawing her a picture. Zoe took interest in an Ankylosaur egg that was damaged and later watched it hatch. Zoe was taken by her father to The Eye where she saw the house that she was born and had a virtual roller coaster ride until an electromagnetic pulse disabled the power, causing Zoe to have to crawl through the access hatch to help her father get out. ("The Runaway", "Bylaw", "Nightfall")

Zoe listened to her sister's theories that Ken Horton was not who he said he was, believing that he might in fact be a vampire, and later ran to her father and told him the secret panic word ("Asparagus") to let her father know that Maddy was in trouble. Zoe got the lead in the harvest festival, playing Commander Nathaniel Taylor. The baby Ankylosaur that Zoe had been looking after, Boxer, was growing and had to be released back into the wild, Zoe attempted to sneak him out of the research lab but was stopped by her parents and eventually had to let him go. ("Proof", "Vs.", "Now You See Me")

She cried out from the secret hiding spot to her mother when Population Control came looking for her, thus alerting the police to her location.

She feeds a Brachiosaurus shortly after arriving in Terra Nova and this act attracts more Brachiosaurs, and colonists, to gather near the fence.

Along with her sister she meets Terra Nova resident Mark Reynolds.

Zoe is very curious and eager to learn, and does not show fear easily considering her age. She will turn to her family when distressed, however. She is very enthusiastic about the flora and fauna of Terra Nova, as she approached and fed a Brachiosaur almost immediately after arriving at the Colony.

Zoe and her father, Jim, are shown to have a great bond before and after his arrest. After two years of separation, Jim was afraid that she might have forgotten him, but it is revealed that she knew who he was when she called him "daddy". 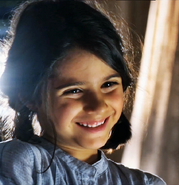 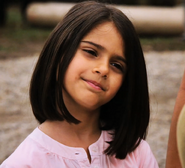 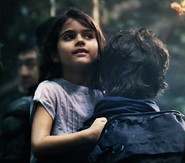 Retrieved from "https://terranova.fandom.com/wiki/Zoe_Shannon?oldid=25658"
Community content is available under CC-BY-SA unless otherwise noted.