Start a Wiki
"What Remains" 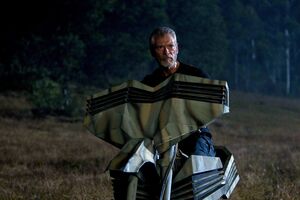 "What Remains" is the third episode of Season 1 of Terra Nova. When Elisabeth, Jim, Malcolm and Taylor investigate radio silence at a nearby scientific outpost, they discover an outbreak of a mysterious virus causing memory loss, paranoia and eventually death. The group must work together to find a cure before they lose their sanity and all of Terra Nova is infected. Maddy is also revealing feelings for a boy, while Josh pines for his ex, Kara.

The episode starts with Dr. Jonathan Guagenti in a room playing with a green beetle. The beetle leads him outside the room, where Jonathan sees wildlife. He takes a look at flowers and plants, and then sees a dinosaur. The Carnotaurus opens his jaws and devours Jonathan.

The next scene, Jim and Elisabeth are talking about why Elisabeth is leaving with the Commander. She says its just to investigate what's going on at Outpost 3, since no one there is responding to communications attempts. She also tells Jim she forgot her wedding ring at the medical facility, asks him to pick it up for her. Lieutenant Washington is then left in command by Taylor. Jim sees that Malcolm has his own rover, while asking why he doesn't get one even though he is law enforcement.

Taylor and Elisabeth arrive at the outpost. They see the gate is open when it shouldn't be, and Taylor notices chewed cables. He notes that Ovosaurs probably did that to the cables. When the team enters the lab, they examine what's happened. They see signs saying "Do Not Go Outside" and "This Is Not A Dream." They hear noises and go into a room to see what's happening. Two people are lying down on beds, and a woman arrives at the door in front of them.

They talk to the woman, who can't remember why she's there. The woman states that the last thing she remembers is running around in snow up to her knees, and then was in the lab. She doesn't know that she's in Terra Nova. Elisabeth and Taylor discover a video in the main lab. It shows a scientist talking about the early stages of the memory loss. Elisabeth finds papers that the scientist wrote, that end up turning into "Twinkle, Twinkle, Little Star." It is revealed that one of the scientists was working on genetic/memory manipulation and created a virus to disperse it. Taylor says that until they know what's going on and how to fix it, nobody's going home.

Back at home, Jim gets the wedding ring. Zoe comes in sick from school. Josh is then seen hanging out with Skye and her friends, playing the guitar he bought from the man. Skye enjoys it.

At the outpost, Taylor finds Dr. Guagenti almost entirely eaten by the Carnotaurus. Elisabeth is on seen on a video call with Jim talking about Maddy's date, and what Elisabeth's working on. Jim mentions that Zoe is sick, and she realizes Jim also has a cold. After she logs off, she asks herself who Zoe is.

The end of the date is being shown between Maddy and Reynolds. Jim tells Maddy that he completely ruined his first date with Elisabeth, but still asked her out again, because he knew that "No matter how much of a fool I made out of myself, in the end, I knew it'd be worth it."

Jim goes into the command base to talk to Washington, to see what's going on with the team in Outpost 3. The place is under quarantine and she doesn't know what is going on at the outpost. Washington informs Jim to stay, but he leaves anyway. He asks Malcolm for his rover. Malcolm decides that they are going together. Malcolm gives Jim an awful tasting root to stop him from feeling sick for 12 hours.

Josh is sitting on a hammock when Skye comes out to see him. He asks her if they should tell someone about the writing on the rocks they saw by the waterfall. He "loses" himself in her eyes and they share a kiss. Josh pulls away, and says he really likes Skye but he still thinks about Kara a lot. She says it's fine and doesn't hate him, as he thinks. She tells him she could help him get Kara to Terra Nova.

Malcolm and Jim arrive at Outpost 3, where they find that Ovosaurs have been chewing the wires again. They go inside. Washington is seen on a monitor, trying to reach the post. He answers her, making her annoyed that they are at the outpost when they were told to stay at the main colony. He ends the communication, and when he turns around he sees Elisabeth, who shoots him with a Sonic Rifle. When Jim takes off his helmet to show who he is, she forces him down. When Malcolm takes off his helmet, she starts crying, out of happiness. She hugs him, leaving Jim bewildered. Jim is annoyed when Elisabeth doesn't recognize him. Malcolm sees that she's lost 20 years of her memory, and thinks she's in medical school again. He tells Jim that she'll start losing more of her memory and might eventually die. Jim looks heartbroken when Malcolm reintroduces him to Elisabeth.

At home again, Skye brings Josh to Tom Boylan, a bartender. We see he can get things to Terra Nova, because he's done it in the past. He says people are difficult and expensive but Josh is still willing to try. The man realizes Josh is the cop's son, and needs his trust. Josh ensures that all secrets are safe with him.

Malcolm is having trouble getting Elisabeth up to date on time, and why she is here. Jim finds a video of her talking about what's going on to her, being in Outpost 3. She finds out she's been there for over a day, and wants to make sure the men are okay. The lights go out due to the Ovosaurs and Jim leave to shoo them away. When he gets outside he doesn't see them, but a dark figure runs behind him. He goes back inside. As he's walking along inside he sees Brady, a member of Taylor's team. He hears a noise and looks up to see Taylor. The commander shoots the glass between them, and threatens to shoot Jim. He pins Jim against a wall with a knife to his throat. He looks at Jim's ID Card, and can't remember what Terra Nova is. Jim tries to convince Taylor that Terra Nova is a place, not a code name. Taylor tells Jim that he's in the war in Somalia. He also says that he'll find out who took "her", Ayani, his wife. Jim is confused, while Taylor is angry. He threatens to slit every throat in sight if he can't find his family.

Elisabeth and Malcolm are seen talking about the blood samples and how they are progressing on trying to cure the memory loss. Malcolm is about to kiss Elisabeth, but Jim comes in and shoves Malcolm onto the table. Elisabeth sees that Jim is hurt and asks why. He talks about how he saw Taylor and how confused he is. He also tells them Taylor's going back to the colony because he think he's in a war from his past.

Mark Reynolds goes to Maddy's house to see if she's okay, because her parents are both gone. Because Maddy is so scared, Mark decides to tell her what's going on. Taylor arrives back outside the Terra Nova colony. Malcolm and Jim are carrying an unconscious Brady to the truck when Malcolm goes through another amnesia phase where he doesn't remember anything. An Ovosaur appears after Malcolm's yelling, and tries to attack Malcolm. Jim pulls Malcolm into another room and closes the door. Jim sees some cables like the ones the Ovosaurs had been chewing outside. He cuts through some cable in hopes to lure in the Ovosaur, since that's what they're attracted to. He opens the door to the room he and Malcolm are in, and lets the Ovosaur run past them to chew on the cut cables. Malcolm and Jim get out, but Malcolm goes crazy again. He doesn't at all what is happening. Jim gets annoyed by it, and punches Malcolm, knocking him out. Jim decides to help Elisabeth with the research because she doesn't think she can do it alone. She senses something more between the two of them, announcing they must be friends. Jim tells her about Maddy, his daughter, being careful not to share that he and Elisabeth are married. She accepts this and moves on.

Taylor arrives at the Terra Nova gates. He punches a man down as soon as he walks outside the gate.

Elisabeth sees papers with the names Josh, Maddy, Zoe, and Jim. This is when she realizes that she and Jim are married. He then shows her the wedding ring to reinforce this. She doesn't remember and is very upset. He tells her that what he feels for her is more than a memory, which calms her. He also says he's fine and not experiencing any memory loss, which confuses her, but then he sneezes. He pulls out the root he chewed on to make the cold symptoms disappear, which makes her think it's what blocks the virus.

Maddy marches into the base to speak to Washington. She tells Reynolds not to let Maddy in, but Reynolds refuses to bring her away. Taylor comes out from the dark, and grabs Mark, putting a knife to his throat, scaring Maddy. Washington tells Taylor he's sick and there is no war anymore. She tells him she and Reynolds are on Taylor's side as soldiers. She convinces him she would never lie and that Terra Nova is home. He asks where Ayani is, and she tells him that she is dead. He doesn't remember and calmly she tells him she's going to help him remember. He replies with, "Ayani's dead. Why would I wanna remember that?" He then puts the knife to his neck and is about to slit his own throat, when Washington shoots him with a sonic gun, stopping him.

Elisabeth and Jim examine the root Malcolm gave to Jim, and can't find anything that would make him immune to the disease. He sneezes again. Elisabeth then realizes that it's the cold that is stopping the virus, not the root. She goes into a scientific talk about how to distribute the cold. Instead he kisses her.

Commander Taylor wakes up on a bed, from the shot of the sonic gun Washington gave him. Elisabeth asks him if he knows where he is. He looks around and decides he's in Terra Nova. She tells him he will feel confused for a bit. He is proud of the Washington for shooting him.

Tom, the bartender, goes to see Mira. He gives her a power cell and some medical supplies. She accepts this, after he says he can't steal weapons for them without bringing too much attention. He tells her he needs to send a message to 2149. She asks about what, and he tells her a boy wants to buy his girlfriend through the portal. He reveals to her that it is the cop's son that wants this, and she is pleased. This reveals that Tom Boylan is the Sixers' spy.

Behind the Scenes of "What Remains" (1x04)
Sneak peek

Start a Discussion Discussions about What Remains