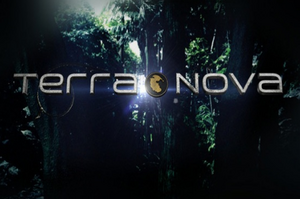 "Vs" is the eighth episode of Season 1 of Terra Nova. As Taylor searches for the "Sixer" mole in Terra Nova, Jim discovers an old murder and Taylor is the prime suspect.

A dragonfly flies through the Terra Nova colony, out over some soldiers on patrol, out into the jungle, and eventually making its way to the Sixers' camp. It lands on the hand of Mira, who says, "what have you got for me today?"

After his arrest in "Proof", Tom Boylan sits in the brig. Commander Nathaniel Taylor interrogates Tom, demanding to know what else he knows or has told the Sixers. Boylan insists that he knows nothing. Taylor, disbelieving of Boylan, leaves him to rest to the piercing sound of a loud alarm siren.

While the Shannons are preparing for the "Harvest Festival", Josh pulls his father, Jim, aside and asks of Boylan's whereabouts. Jim tells him that Taylor still has him detained. Josh asks Jim to check on the justification of keeping Boylan detained. Jim confronts Taylor, who takes Jim to the brig to see Boylan. Taylor says that even spiking Boylan's food hasn't brought forth any more information from Tom. Washington enters the brig and tells Taylor she needs his help with some problems with electrical power in a section of the colony. After Taylor and Washington leave, a delirious Boylan tells Jim, who he thinks is Taylor, that he'll expose Taylor by revealing what he has buried under the "Pilgrim's Tree".

Jim goes to the lab to try to find the Pilgrim's Tree on a map, when Malcolm Wallace shows up. Jim asks him if he knows about the tree. The tree apparently is where Taylor had stayed during his first days after arriving at Terra Nova. Malcolm shows Jim where on the map the tree is located, and Jim heads out to take a look. After arriving at the tree, Jim begins digging, and unearths the skeletal remains of a human. Jim brings the remains to Elisabeth, who notes that the body is missing its right arm, and that a rib fracture may indicate that the person was shot. She says she'll run some tests to try to determine who the person was. Jim decides to not bring his findings to the attention of Taylor just yet, as Jim is now getting suspicious of Taylor.

Out in the jungle, Mark Reynolds and a security team are taking supplies to Med Outpost 9. Before making it to the outpost, the convoy is ambushed by the Sixers. The Sixers confiscate all the supplies and send the security team back to the colony.

Maddy is directing the practice for a play in which her sister, Zoe, is portraying Nathaniel Taylor in a story about the history of Terra Nova. Leah and Sam Marcos are also on stage. While practicing, the earlier seen dragonfly flies near the stage, and a nearby solider swats it out of the air, knocking it upon the stage in front of Maddy. Maddy looks at the dragonfly in surprise, as she sees a microchip attached to it.

Upon further investigation, Malcolm deduces that the dragonfly was being used like a carrier pigeon in order to send messages back and forth between the Sixers and someone in the colony. Unfortunately, the dragonfly's wings were damaged and it can't be used to be tracked back to the spy.

Mark and his team arrive back the colony and says that they were attacked by Mira and the Sixers. Washington tells Taylor that she didn't organize that supply mission until after Boylan was in the brig, therefore Boylan couldn't be the spy who would have tipped Mira off regarding the time and location of the mission. Taylor agrees and has Boylan released from the brig.

Elisabeth discovers that the person whose body was found did not come through any known Pilgrimage, and that in fact, they came through some time between the second and third Pilgrimages. Jim questions Boylan at his bar regarding the body, telling Boylan that he told Jim the information about the location of the body while he was in the brig. Boylan says he knows nothing of the incident regarding the killing of the person, other than that Taylor had asked him to help bury the body. Boylan says that was the last night that Taylor's son, Lucas, was seen.

Malcolm discovers Elisabeth working on the body, and asks why he doesn't know about it. She says that it is not his work, and that he has a habit of sticking his nose into other peoples' work. He says that he's in charge of the science team, and that all work is his work, and must be reported to him. He then goes off to retrieve Taylor. Jim tells Taylor that he found the body after receiving an anonymous tip. Taylor dismisses the failure of Elisabeth to report the body to Malcolm as a result of being new to the colony. Taylor also brushes off the finding of the body, saying it is most likely the body of a Sixer, making the Shannons even more suspicious, since they now know that the body was from well before the time of the Sixers.

While watching Zoe's play, Jim and Elisabeth notice that one of the characters in the play, General Richard Philbrick, Taylor's commanding officer, only has one arm. Before Jim and Elisabeth can check on this newly found information, Taylor arrives and has Jim arrested for being the Sixers' spy.

Now with Jim in the brig, Taylor comes and hints that he'll let Jim go if he stops his investigation of the body found under the Pilgrim's Tree. Jim refuses, telling Taylor he might as well throw away the key to the brig and leave Jim in there. As Taylor begins to leave the brig, Jim asks Taylor if he killed General Philbrick. Taylor stops and says that yes, he killed the general. Taylor says that Philbrick would have killed him, so he had to do it. Taylor then explains the events leading up this. Apparently those employing Philbrick and Lucas, and later the Sixers, were trying to get a time portal created that could work in both directions, so that natural resources from Terra Nova could be sent back through to their home time-stream. The commander discovered his son's work and destroyed it. Lucas went OTG and Taylor tracked him. He found Lucas opening a time portal, and General Philbrick emerged. Taylor confronted Lucas and Philbrick, and the general said he was there to relieve Taylor of command. Taylor refused to submit, and the general pulled a pistol. Taylor pulled his pistol out as well, beating Philbrick to the shot. Taylor's shot hit Philbrick in the chest, killing him. Lucas pulls a gun on Taylor as well, which Taylor quickly knocks away. Taylor can't bring himself to kill his own son. Instead he allows Lucas to flee into the jungle, with Lucas vowing to return. After Taylor finished his story, Taylor and Jim agree to not let the other inhabitants of Terra Nova know that the colony wasn't partially built upon a lie. Taylor releases Jim from the brig, knowing he's not the Sixers' spy.

At the Terra Nova Harvest Festival, Taylor goes on stage and gives an emotional speech to the crowd. The speech is followed by fireworks, which Lucas observes from somewhere in the jungle.

Taylor reveals the threat to Terra Nova's existence, and its "real" purpose. It is also revealed how the Sixers have been communicating with Terra Nova, and why his son left him, as well as why the Sixers were sent. 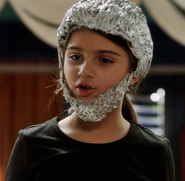 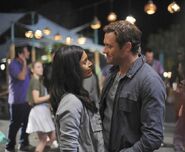 Firework at the Harvest Festival

Retrieved from "https://terranova.fandom.com/wiki/Vs.?oldid=25653"
Community content is available under CC-BY-SA unless otherwise noted.