Turret Man 1 was a member of the Sixers, a splinter colony that broke off from Terra Nova. He was killed by a carnotaurus in “Genesis: Part 2.”

This Sixer was a white man. He had short, brown hair as well as a thin beard. During his only appearance on the show, he wore dirty protective gear.

This man was a hired gun who was brought to Terra Nova on the sixth pilgrimage via the rigged lottery[1] to work for Mira, Lucas and their employers. In 2147[2], the Sixers left the colony because Taylor had discovered their true agenda. Following that, they had to stay in the jungle.

On September 27th, 2149, the Sixers sent a two-vehicle convoy to negotiate the release of Carter. This particular Sixer was among them, handling the gun turret of one of the rhinos. The convoy was attacked by a carnotaurus. He and the other vehicle’s turret man were shooting at the dinosaur and managed to momentarily stop it. However, while this man thought they were safe, another carnotaurus ran up to his vehicle and killed him.

In the original script for the pilot episode of Terra Nova, the Sixers did not exist, and there was no mention of Turret Man 1 or anyone similar to him. The character was created when the pilot was rewritten. 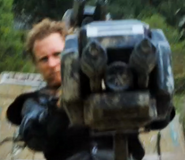 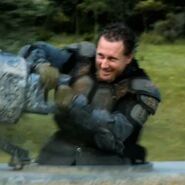 Turret Man 1 right before his death in “Genesis: Part 2”
Add a photo to this gallery

Retrieved from "https://terranova.fandom.com/wiki/Turret_Man_1?oldid=22911"
Community content is available under CC-BY-SA unless otherwise noted.