The prehistoric Sailfish is a 2.5 meters long[1] fish that lives in the sea near the colony. They are predominantly blue to gray in colour and have a characteristic erectile dorsal fin known as a sail. Its two forefins also look like sails. These sails are reddish in color. Another notable characteristic is the elongated bill, resembling that of the swordfish and other marlins.

In the episode Proof Taylor takes Jim out fishing at a sea cliff. Jim hooks the large, prehistoric sailfish. The fish nearly pulls him into the water, with Taylor grabbing him at the last second. The fish manages to escape.

The sailfish was designed, modelled and painted by the artist Justin Lewers.[2] 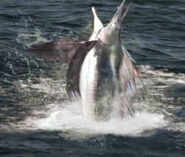 Models by Justin Lewers.
Add a photo to this gallery

Retrieved from "https://terranova.fandom.com/wiki/Sailfish?oldid=16345"
Community content is available under CC-BY-SA unless otherwise noted.