Reilly is a corporal under Taylor's command.

She was first seen in "The Runaway" as one of three security team guards who noticed movement in the jungle and gave the order to inform the rest of Terra Nova Security.

Reilly was seen in the episode "Nightfall" discussing the lack of power in the colony with Nathaniel Taylor and looked after Zoe when Jim had to leave Zoe alone.

In the episode "Vs.", Reilly and Dunham were working security near the Harvest Festival play. She didn't seem concerned about the dragonfly, however she was the first soldier to investigate the chip on the dragonfly's leg.

Reilly has demolitions training and was able to defuse the Pyrosonic bomb before it could be detonated. 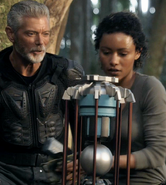 Add a photo to this gallery
Retrieved from "https://terranova.fandom.com/wiki/Reilly?oldid=20659"
Community content is available under CC-BY-SA unless otherwise noted.