View source
watch 01:36
We're Getting Mutants in the MCU - The Loop
Do you like this video?
Play Sound
"Proof" 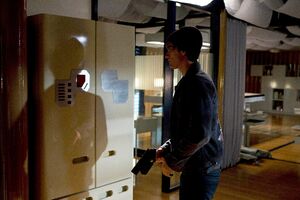 "Proof" is the seventh episode of Season 1 of Terra Nova. Maddy begins interning for the greatest scientist of the colony, Ken Horton, and her life is endangered when she discovers a terrible secret. Meanwhile, Josh makes a deal with the devil in order to consolidate his plan to bring his girlfriend from the future to Terra Nova.

Jim and Nathaniel Taylor begin fishing off the edge of a cliff overlooking the sea. Bones of dead fish can be seen all around the area, the remains of the meals of pterosaurs. A large swordfish is hooked by Jim, and it nearly pulls him over the edge of the cliff. Taylor manages to hold onto him to keep him from going over.

At the Terra Nova colony, Elisabeth tells Maddy that one of Maddy's favorite scientists, Dr. Ken Horton, will be returning to the colony later that, after spending months in the jungle doing research and gathering specimens. Maddy wants to get his autograph on one of the books he has written. When the doctor arrives, he annoys Malcolm Wallace when he doesn't remember his name. He then goes off with Elisabeth and Maddy to get himself checked out medically.

At Boylan's Bar, Tom Boylan informs Josh that Mira has called in the task she previously demanded of him, in order for Mira to arrange for Kara to be brought to Terra Nova. Josh is ordered to steal a rare medication out of his mother's lab in order to help cure a sickness that is occurring at the Sixers' camp. Skye becomes angry with Josh for the dangerous actions he has been performing to bring Kara there.

Dr. Horton passes his medical testing, but refuses to have a brain scan, as he wants to get back to his work. He gives Maddy a tour of his lab and newly acquired specimens, and takes on Maddy as an assistant. He signs her copy of his book, but does not recall the joke she repeats from it. Back at home, Maddy notices that Horton's signature on her book does not match his signature on a letter he wrote to Maddy years ago. When Maddy tells her mother about this and Horton's bad memory, she reminds Maddy that Horton's stroke years ago could have done this. Maddy asks some questions to Horton, relating to the letter, but he doesn't recall the letter. He asks to see the letter, which he then holds on to.

Josh goes back to Boylan and demands proof that Mira can bring his girlfriend to Terra Nova. Boylan takes a hooded Josh out in the jungle to the Sixers' camp, where Mira is initially unwilling to accommodate Josh's request for proof, but finally gives in and provides holographic communication with who appears to be Kara. Josh is satisfied, and agrees to obtain the medicine for Mira and the Sixers.

Back by the sea, Jim and Taylor stumble across a recently extinguished campfire, which Taylor knows to be from Curran, the soldier they recently exiled, for murdering Ken Foster. Taylor tells Jim to head back to the colony, while Taylor says he's going to hunt down Curran.

At the colony, Horton shows Maddy how he plans to save the diseased apple crop using some green beetles. Horton continues to have difficulty recalling his past during their conversation. Maddy releases the beetles from a container, and they immediately fly to the apple trees and begin their work of helping the trees.

Josh steals his mother's keycard so Boylan can replicate it and Josh can it to get into the lab to steal the medicine. After Boylan thinks he has successfully replicated the keycard, he tells Josh that no one will be able to trace the opening of the cabinet with the medicine back to his mother's keycard. Josh later breaks into the lab and attempts to use the keycard to gain access to the medicine, but the keycard fails. He pulls out the Sonic Pistol given to him by Boylan, points it at the cabinet, and fires. Josh is repelled backward and slams into the wall behind him, injuring himself, but successfully opening the cabinet in the process. He takes all of the indicated medicine from the cabinet.

Taylor finds a trail of blood in the jungle, which he then uses to track down Curran. Taylor finds Curran with a badly injured leg, which Taylor says is the result of an encounter with an Ancestral Komodo Dragon, which is stalking him through the jungle, waiting until Curran can not fight the reptile off, due to his injuries. Taylor mixes up something for Curran's infected leg, but doesn't tell Curran why he is helping him. Jim arrives back at the compound and tells Washington that Taylor is going after Curran. Washington informs Jim of the break-in at the lab.

Maddy enters Horton's lab while he is away, only to find her letter burned and in the trash. Horton returns to the lab and stops using his cane while walking around the lab, with no limp present. He scoops up the bag of trash containing the pieces of letter, but Maddy still has a piece of it. Horton leaves the lab again, regaining his cane, and his limp, before exiting the building.

While working in the family garden, Elisabeth and Jim are talking about the break-in at the lab, and Elisabeth mentions that someone in particular may die without the medicine. Josh asks if more can be made, and she says no, that they'd need to wait for the next Pilgrimage to obtain more. Josh becomes angry and storms off, insisting they need a better way to communicate with 2149.

Maddy theorizes that someone is impersonating Horton, and that they had a "facer" surgically alter their face before coming to Terra Nova. She realizes she should be able to get the "real" Horton's DNA from the saliva residue on the envelope her letter had come in years ago that she still had, and compare it to the "fake" Horton's DNA. After talking with Horton briefly, she grabs his drinking cup and sneaks off to compare the DNA using the equipment at the lab. Malcolm catches Maddy using the equipment when she doesn't have authorization to do so, but when she tells him what she is doing, he enthusiastically tries to help her along with her testing, hoping to show that Horton is a fraud. But the DNA checks out OK in the system. However, Horton is seen secretly listening in on the conversation between Malcolm and Maddy.

Josh goes to Boylan's Bar and steals back a single vial of the medicine, to help the person that his mother had said needed it so badly. Josh tells Boylan that his father had been asking a lot of questions about the break-in at the lab, so Boylan decides he should do something to keep the investigation from leading back to Josh and himself. He decides to frame one of his less desirable customers. The man is brought in and is high on the particular drug in question, but Jim senses something isn't right.

Back in the jungle, Taylor comes face to face with the Ancestral Komodo Dragon as it comes to finish off Curran, but Taylor says the Komodos are cowards when confronted. He is correct, as the Komodo decides to leave after Taylor threatens the beast with a large knife and a fiery torch. After the Komodo is gone, Taylor tells Curran in order to redeem himself, he must find the Sixers and pretend to join them, so he can determine who the spy is at Terra Nova that is giving the Sixers information and supplies.

Maddy continues her investigation of Horton by visiting The Eye. Using the information there, she deduces that the real doctor must have been killed by his former assistant at some point, who then altered his appearance to look like Horton. Horton then enters the chamber, sees what Maddy has been researching, and confronts her ominously. Before the Horton-imposter can do anything to Maddy, another person enters the room, and Maddy is able to make an escape. Maddy decides to go pick up her sister, Zoe, from school, only to find out that "Horton" has already picked her sister up.

Maddy finds Zoe and the fake Horton in the apple orchard, and tells Zoe to go home and tell her father that she'll be late in cooking the "asparagus". Horton informs Maddy that her deductions were indeed correct, and that he was Horton's assistant, Andrew Fickett. He ties her to a tree and reveals a canister containing a spider inside. He says that it will look like she just fell asleep, but won't wake up. While inserting her arm into the canister, he explains that the real Horton lied about his research and didn't deserve a spot at Terra Nova. But before the spider can get to Maddy's arm and bite, Jim arrives and knocks Fickett down and the spider along with him. Jim had been alerted when Zoe informed him of what Maddy had said, "asparagus."

While the rest of the family is in their house talking about Maddy's good intuition, Josh walks in and places the vial of medicine on the table, in front of everyone. He tells them the whole story of his involvement with Boylan and the Sixers, and his attempt to get Kara to Terra Nova. Jim immediately confronts Boylan, who tells that Mira does indeed have a method to communicate with 2149 without the Time Portal being open. Jim brings this news to Taylor, who tells Jim that the only one who could be responsible for creating this technology would be his son, Lucas, who has been missing from the colony for a long time. Jim suggests that they can go "rescue" Lucas from the Sixers, but Taylor dismisses this, as he believes that is not the situation between the Lucas and the Sixers.

Later, as Maddy is walking through the apple orchard, she picks one of the now-healthy apples, and smiles.

Rainstorm on the Set of Terra Nova
Rain on the set.

Behind the Scenes of Terra Nova "Proof"
Behind the scenes.