The Population Law is a law that requires that families only have 4 members or less (2 parents and 2 children). If a family violates this law, they have to pay a fee or face arrest and time in prison. 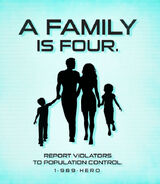 Population Control Officers are government officials who are sent to investigate families that are suspected of violating the Population Law.

At 2149-07-27 hundreds of people protested in Boston against the Population Law. The group called itself "A FAMILY IS LOVE". But the protests were ignored by the officials.

The Shannon Family broke the Population Law. When three Population Control Officers discovered the third Shannon child, Zoe, her father, Jim Shannon assaulted the officers, which resulted in his arrest and imprisonment.

Retrieved from "https://terranova.fandom.com/wiki/Population_Law?oldid=16088"
Community content is available under CC-BY-SA unless otherwise noted.