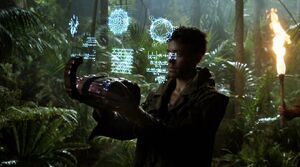 "Nightfall" is the sixth episode of Season 1 of Terra Nova. A meteorite crashes all the technology and wreaks havoc in the colony. Meanwhile, Maddy and Reynolds are trapped in the jungle. Back to Terra Nova, Elisabeth and Skye must work together to save Hunter's life from a parasite, Taylor tries to stop Mira and the Sixers invaders, and a mysterious man is present.

A meteor falling through the atmosphere passing over Terra Nova explodes, causing an electromagnetic pulse (EMP) burst, which causes the colony's electronics to short and fail. A large fragment of the meteor impacts nearby, causing a shockwave which does some minor damage to the compound.

When the meteor explodes, causing the EMP, Jim and Zoe are inside the room containing "The Eye", a holographic simulator containing much of Earth's history (relating to the 2149 timeline). After Zoe sees the house in which she was born, and after she and Jim "ride" in a roller coaster, the EMP knocks out the power to the room, which has electronic door locks. Jim and Zoe are then stuck in the room. Jim finds a small escape route under the viewing chair, through which Zoe can fit. Zoe makes her way through the tunnel under the floor and arrives outside the door to the room for The Eye, and manually unlocks the door.

Maddy Shannon pretends that she intends to spend her Saturday doing homework. After all the members of her family leave, she meets with Mark Reynolds and they go outside the gate to spend the day together. The are picnicking when the meteor impacts. Mark finds that neither his rover nor his radio will work. He initially assures Maddy that they will be able to reach the settlement before nightfall, but later revises his estimate and tells her they will have to spend the night in the jungle. They cover each other with pungent slime to hide their scents and spend the night together in a tree to avoid creatures. In the morning, their share their first kiss and return to the settlement. Maddy tells her parents that she accomplished a lot during her supposed studies, and blames trash for the lingering scent.

One Sixer tells Mira about the energy failure of Terra Nova, so she decides to attack it. Mira knows that they're still outnumbered, so she brings an Empirosaur to Terra Nova's fence hoping it can serve them as help. Taylor and Jim make the Empirosaur go away by making a firewall in front of the gate. Taylor notices the dinosaur has something in his back, so he knows it's a distraction to get the box. Both of them go to the Lab to see the box, and are ambushed by Carter and two Sixers who are trying to steal the box. After a fight Carter escapes with the box and finally gets it to Mira.

Mira and Carter meet a man named Lucas in the jungle. After Lucas reminds Mira that her purpose in coming through the time portal was to bring something to him, she gives him the box recently recovered from the settlement. Lucas opens the box and it displays some graphics that resemble those near the Waterfall. Lucas comments that "Dad" will have to make a choice.

Zoe learns where she was born and that she was illegally born.

Retrieved from "https://terranova.fandom.com/wiki/Nightfall?oldid=25008"
Community content is available under CC-BY-SA unless otherwise noted.