Mira is the leader of a rebel group that fights against Commander Nathaniel Taylor and Terra Nova. They are called "Sixers".

Mira claims to have a child named Sienna back in 2149. She is currently being held by a unknown group in 2149. The unknown group has promised Mira that if she can take down Commander Taylor that she will be able to see her daughter again. Mira was an ex-con because she was a secessionist. She was captured by the army when she invaded a dome (year unknown). For many years she lived on the streets with her daughter after being released. After General Richard Philbrick failed to take down Taylor, she was hired to stop Taylor. When she does this, Terra Nova will be destroyed and she will return to 2149 and live with her daughter and be rich.

Mira is the leader of the Sixers. She separated a group of humans who came to Terra Nova on the Sixth Pilgrimage to destroy Taylor and Terra Nova and make the portal go both ways.

She led an effort to rescue the captured Sixers member, Carter, from the jail in Terra Nova. Mira wanted to make a trade with Taylor, she would give Taylor meteoric iron, in trade for Carter, medical supplies and ammunition. Meteoric iron is a material that is mined within Sixer territory. ("Genesis") Although she asked for ammunition, she didn't got it from Taylor.

Later, she told Josh she can try to get his girlfriend Kara to Terra Nova from 2149, but in trade Josh once had to do a job for Mira with no refusal and no questioning. Josh agreed to do whatever she would ask without questioning. ("Bylaw")

Lucas says that the reason she was brought to Terra Nova was to bring him the box. ("Nightfall")

Mira captured Commander Taylor at the Waterfall when he was looking at Lucas's latest calculations. But Taylor escaped, and instead of being captured, he captured Mira as his prisoner. Unfortunately, they were being hunted by Slashers, forcing them to work together in order to survive. ("Now You See Me")

Mira lived in Taylor's office after Terra Nova was taken over by the Phoenix Group. She became eager to see her daughter, however, she was first ordered to investigate The Badlands. She and the other Sixers found the figurehead of an 18th century ship and it was sent back to Terra Nova. Mira appeared grief-stricken when she realized the portal was destroyed and she could not return to 2149 to see her daughter again. She and the Phoenix Group fled to the Badlands later on. ("Occupation-Resistance"). The reason of this is unknown.

Mira has had some training as she once served as security for one of the domes. She is very determined to complete the mission that she was sent to Terra Nova to do, in order to provide for her daughter back in 2149. She will do what is necessary to keep the Sixers alive and complete the tasks they were sent to do, including kidnapping Terra Novans, ambushing supply runs and raiding the colony. 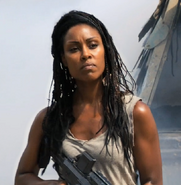 Markings on Mira's chest in "Now You See Me"

Retrieved from "https://terranova.fandom.com/wiki/Mira?oldid=25646"
Community content is available under CC-BY-SA unless otherwise noted.