James "Jim" Shannon is the husband of Elisabeth Shannon and father to Josh Shannon, Maddy Shannon and Zoe Shannon. He is currently a security officer for Terra Nova.

Jim is a former police detective, who was arrested for fighting other officers after they discovered he had broken the Population Law. He manages to escape from prison two years later so he can travel to Terra Nova, seeking a new beginning for the planet and for his family.

"Reynolds, you are aware that I carry a gun, have a quick temper, and hold grudges." - Jim Shannon to Mark Reynolds (when asking to court Maddy, in "The Runaway")

Jim was a former police detective, working in the Narcotics Division for the Chicago Police Department[1] until he was arrested for not following the "A Family is Four" law. He attempted to hide his youngest daughter, Zoe, from Population Control, but she made noises and cried for her mother, causing her to be discovered.

Jim attacked the officers when they discovered Zoe in a secret vent, but was tasered and taken to a maximum security facility. Two years later, Elisabeth came to visit him and informed him that the family had been recruited to travel to Terra Nova. She gave him a laser knife secretly hidden inside an oxygen mask to help him escape and he manages to rejoin his family.

He still believes his actions were right, and infiltrates the Tenth Pilgrimage, traveling with his family to Terra Nova.

Jim's arrival in Terra Nova is marred immediately by the fact that he brings Zoe with him (she was hidden in his backpack). Nonetheless, he is willing to accept punishment and takes full responsibility for his actions. He attends the welcoming with the rest of the Tenth Pilgrimage and is brought to Nathaniel Taylor afterward.

Jim is initially added to Terra Nova's agricultural detail during his meeting with Taylor. Afterwards, he begins his job and shows tremendous diligence, all while being observed by Taylor from a distance.

While being told how to fulfill his duty in agricultural detail, Jim notices a suspicious man (a member of the Sixers), and silently pursues the intruder until he sees the Sixer pull out a weapon. Upon realizing that the Sixer intends to kill Taylor, Jim warns the Commander and tackles the would-be assassin to the ground. This results in Jim being added to the Terra Nova Security Team.

Jim is shown to be a loving, protective, and caring father/husband toward his family. He yearns for his children to accept their new home and to become hard workers. He can lose his temper, however, and he does so only when he feels a family member's life is in danger or when a rule is being broken. When Reynolds asked Jim permission to court Maddy, Jim told him "I carry a gun, have a quick temper, and hold grudges".

To an extent, Jim has also shown his own craftiness. He crafted a plan to escape prison, he hid Zoe (his youngest and illegal child) in his backpack, and also entered the portal to be with his family.

Jim appears to have a great relationship with his wife, Elisabeth. He has shown affection toward her numerous times. However, they are still working out their time apart.

His son was difficult and rebellious toward his father at first. He blamed his father for his two-year absence from the family which resulted from his arrest. However, when Jim came outside the fence to rescue him from being killed by Slashers, Josh finally came to his senses and apologized to him. This seemed to rekindle their relationship.

He and his youngest daughter, Zoe, are shown to have a great bond before and after his arrest. After two years of separation, Jim was afraid that she might have forgotten him, but it is revealed that she knew who he was when she called him "daddy".

Jim is also very protective of Maddy, his eldest daughter. Reynolds casually remarked that Jim would kill him if he ever found out that Reynolds and Maddy had snuck off to go on a date ("Nightfall"). Jim also came up with the code phrase "I'll be home in time to cook the asparagus" for Maddy to tell Zoe if she was in danger ("Proof").

Jim in a deleted scene from "Genesis"

Jim arriving at his Chicago home in 2147 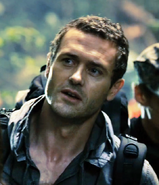 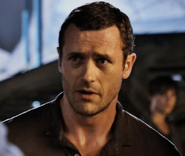 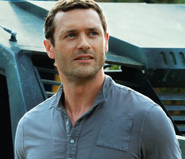 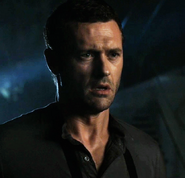 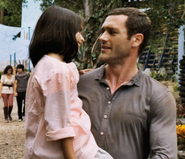 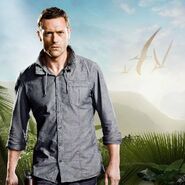 Promotional photo
Add a photo to this gallery

Psychiatric Evaluation Jim Shannon 005
Add a photo to this gallery

Retrieved from "https://terranova.fandom.com/wiki/Jim_Shannon?oldid=26134"
Community content is available under CC-BY-SA unless otherwise noted.