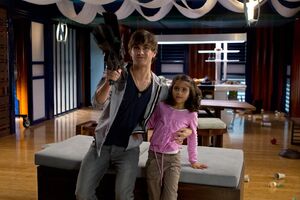 "Instinct" is the second episode of Season 1 of Terra Nova. The Tenth Pilgrimage comes under attack from a legion of Pterosaurs, Jim and Taylor must find a way to save the colony before it’s completely overtaken. Elisabeth discovers a former flame is also living in Terra Nova and may have been responsible for her recruitment. Skye tries to make Josh feel at home and Reynolds gets protective of Maddy.

The episode starts with Lieutenant Okuda and two soldiers going out of the gates to get supplies. There they get attacked by an unseen creature, as they call in to Taylor with the news. The next scene shows Maddy, Zoe and Josh attending a seminar for survival taught by Alicia. And after that the Shannon family is fixing up their house. Zoe keeps a Pitcher Plant and Josh comes home from his community service job. Elisabeth learns about the yellow paint they color their house with. That night Zoe does not want to sleep in her own bed, because she was used to sleeping with her mother for the two years her father, Jim, was in Golad Prison. When Jim and Elisabeth start to get intimate she hears a creature and sends him to go see what it is. It is the unseen animal that attacked the three men, but Jim doesn't know this, so he just scares them away. When he returns, Zoe is sleeping in the bed against Elisabeth.

The next day Taylor and Jim plan to go out to find the missing men, thinking it was the Sixers that attacked them. Elisabeth is working her job when she notices Malcolm Wallace, with whom she went to medical school. Jim then walks in, asking his wife where he can find a medic to come with him and Taylor on the hunt for the men. She offers and introduces him to Malcolm. Malcolm did not know that Jim was out of Golad Prison and in Terra Nova, and is taken aback.

Jim, Taylor and some of his crew head out to try to find the missing men. Before they get to the men, Taylor tells Jim that he wants him to investigate who is giving Mira information from Terra Nova. They arrive at the spot where they find the three missing men. When they get to see the men they notice that their faces are covered in blood. Josh and Skye are walking back from the Community Service job through the market. Josh sees a guitar for sale, while Skye is ordering food. He plays a little bit, which impresses Skye and is also noticed by Casey Durwin, who owns the guitar. Casey tells Josh the guitar sells for 65 Terras, which is a lot. Josh says he can't afford that because he is new, so Casey moves the price down to 60 Terras. Josh says he'll pass.

Elisabeth, Malcolm, Taylor and Jim are in the medical center examining the three men. Elisabeth decides they were attacked from above. Jim notices a claw-like piece on one of the boots and asks if the animal has claws. Elisabeth and Malcolm decide to stay late to work on finding out what creature could have killed the men. Elisabeth tells Jim to take care of the kids. While he does, Maddy asks him "How do you know if a guy likes you?" He says she's too young to be into guys and shouldn't know about them. When Elisabeth comes home, Jim tells her that he forgot to bathe Zoe. She confirms the creature is unknown and new. After Jim presses the issue, she also tells him that she dated Malcolm for a while and that she broke it off.

That night Jim and Elisabeth make an attempt at intimacy once again, when they hear the same noise as the night before. Jim goes outside with Josh, to check it out again. They see the same bird-like creatures, which won't leave. A few more arrive. Josh throws a rock at them and they attack the two. They get inside the house quickly with a few scratches. When Jim sees the scratches that the creatures made on his body, he recognizes the similarity to those that were on the three men that had been recently killed. The next day Malcolm checks out Jim's cut and Jim describes the animal he saw. Malcolm confirms that this is the creature that killed the men. Taylor wants to know why these animals are here. Malcolm says it is because they probably just want food. He also asks for an investigation team, which Taylor declines until they can make everyone safe. Elisabeth quickly agrees but Malcolm wants to fight it. At the end of the scene, Jim finds out that Elisabeth was asked to come to Terra Nova because Malcolm requested her.

The next day, Josh and Skye go back to the market to try to trade some of his things for the guitar. First he tries trading his latest music player that had music from the bands Oblivion, Rainbow Ash and Future Shock but when Casey refuses, Josh offers a cap from Jackie Hayes, a baseball player. Casey declines this hat as well, but notices Josh's platinum necklace, which he said he'd take for the guitar. Josh declines, saying it's not for sale. He ends up not getting the guitar. Later, Skye questions Josh if his necklace was given to him by his girlfriend, and Josh says it was. She then asks him what she was like and he answers that she was smart, really funny and has a tough side..."kind of like you" (referring to Skye). Skye then notices a flock of bird-like creatures. Soon they start to attack Terra Nova residents. Josh tries to protect Skye from them.

Malcolm recovers a dead creature from the attack, and finds it to be an unknown type of pterosaur. He thinks that the pterosaurs may be migrating. Taylor reveals that years ago he and others had discovered thousands of egg shells in the ground on which the colony sits. They had decided to make the settlement in this location because of the fertile ground. However, it is deduced that the pterosaurs are attacking because Terra Nova sits upon their breeding grounds, where these creatures had been hatched years before.

Malcolm and Elisabeth tell Taylor that they will need a live male and female specimen of the pterosaurs in order to try to come up with a method of defending against them. Jim heads out of the colony and returns with the two specimens. Upon studying the creatures, Malcolm and Elisabeth find that they can produce an extremely powerful pheromone which could possibly be used to lure all of the pterosaurs away from the colony and to another location where they can breed.

As more and more pterosaurs continue to arrive at the settlement, security team members are stationed all around the colony. Mark Reynolds comes to guard Maddy and the Shannons' home. Jim tells Maddy, "that's how you know a boy likes you." Jim then heads to the Clinic while Elisabeth continues to work on the pheromone there. Skye stays with Josh at the Shannons' house and bets Josh 60 Terras that they won't make it out of the ordeal alive. Pterosaurs force their way into the house via the air ducts, and Mark is knocked unconscious. Maddy, Josh and Skye drag Mark into a bedroom, but Zoe is left hiding in the room with the pterosaurs. Just as a pterosaur is about to get to her, Josh kicks it away and gets Zoe.

Jim and Taylor leave in a transport, spraying pterosaur pheromone behind them. They lead the pterosaurs away from the colony to breed at another location. Skye says she will give Josh the 60 Terras she bet him, and gives him a kiss on the cheek before going to check on her housemates.

Jim and Elisabeth arrive back at their house to find their family is asleep. They retreat to their bedroom.

This episode was an homage to Alfred Hitchcock's movie The Birds. Brannon had that idea early on. There are many shots in this episode that were very specifically modeled on The Birds.[1]

This episode had the most feature shots. 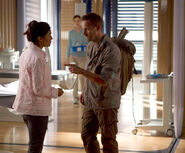 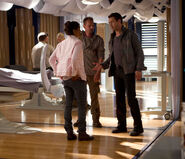 Add a photo to this gallery
Behind the scenes

Retrieved from "https://terranova.fandom.com/wiki/Instinct?oldid=25601"
Community content is available under CC-BY-SA unless otherwise noted.