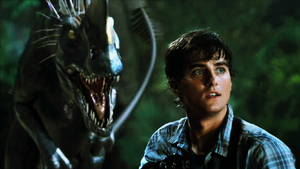 "Genesis: Part 2" is the second half of the pilot episode of Terra Nova. It was broadcasted on September 26, 2011. The episode was watched by 9.22M people in the US.

Elisabeth Shannon, a highly qualified doctor, is seen attending a patient. After saying the word "Sixers", the patient suddenly jumps from his bed and puts a laser knife to Elisabeth's throat. After using Elisabeth as a hostage shield and forcing a nearby officer to disarm, the man runs from the medical sector. Jim Shannon notices the man acting suspiciously in another part of camp, and follows him. The man attempts to attack Commander Nathaniel Taylor, but Jim successfully stops him.

Taylor takes Jim to a nearby waterfall and tells him that the Sixers are a splinter group with an agenda. They all came of the Sixth Pilgrimage with a secret supply of weapons. Taylor makes Jim part of Terra Nova's security force.

Later, Taylor and Jim notice a group of Sixers heading toward the colony. After they begin chasing the Sixers, they realize the Sixers are actually fleeing from two Carnotaurus. The attack of the two dinosaurs is repelled, and Jim, Nathaniel and the Sixers enter the colony safely.

Mira and Taylor negotiate the terms of the release of the patient that attacked Taylor, named Carter. Taylor asks for Meteoric Iron in exchange for Carter. Mira also wants some medical supplies. They agree to terms and Carter is released to the Sixers.

Josh and Skye meet up with their friends and start making moonshine from fruts. The group is hunted by Acceraptors, known as "Slashers". The group take refuge in an armored vehicle abandoned by the Sixers. In the attack, Tasha, Max and Hunter get seriously injured when they panic and leave the armored vehicle. Terra Nova Security (including Jim and Elisabeth) comes to their rescue and they all return to the colony safely.

The episode ends with a family reunion between Jim and Josh. The whole family gazes at the big moon.

The pilot was filmed filmed over 26 days in late November to December 2010 in south-east Queensland, Australia,[1] and additional material was shot in 2011.[2][3] The shooting was slowed down by heavy torrential rain. Because of these setbacks, the pilot itself cost between $10 and $20 million.[4]

The two-hour premiere was supposed to be aired as a preview in May 2011,[3] but was pushed back to Fall that year to give the production team time to complete the special effects.[5]

Skye and Josh shooting at a Slasher

The DVD contained a number of deleted scenes from the show. All but one were cut from the pilot.

Retrieved from "https://terranova.fandom.com/wiki/Genesis:_Part_2?oldid=25570"
Community content is available under CC-BY-SA unless otherwise noted.