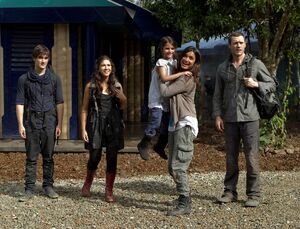 "Genesis: Part 1" is the first half of the pilot episode of Terra Nova. It was broadcasted on September 26, 2011. The episode was watched by 9.22M people in the US.

In the year 2147, with the Earth's ability to support life quickly reaching its end, a military-like law enforcement system has been put in place. There is a two-child rule but Jim Shannon and Elisabeth Shannon have a 3rd child, Zoe, in addition to their two permitted children, Josh and Maddy.

Jim enters the residence wearing a Rebreather, and holding a brown paper bag. Josh eagerly goes to his father, asking what is in the bag. Jim takes out an orange, and the entire family is very surprised, implying that fruits and vegetables are in short supply. Josh begins to peel the orange for Zoe.

Suddenly Maddy rushes into the apartment and breathlessly warns her family that she saw the Population Police in the lobby. Immediately they hear a loud knock on the door. They know it is the Population Control Police. Anxiously Elisabeth hides Zoe in an air vent, giving her a toy for comfort.

The police come in and start tearing up the family's home, convinced that Zoe is somewhere in there. They are about to give up when a scared Zoe whimpers from the vent. One of the officers tears open the vent and grabs Zoe. Jim loses control and begins to assault the cops, but the officers are able overpower him, and he is sent to a maximum security jail for an eight-year sentence.

Two years later, Jim is sick in his cell at Golad Prison. Elisabeth enters for a visit and the guard states she has "bought five minutes" with Jim. Elisabeth tells Jim she has been given a place in the Tenth Pilgrimage, but she is not allowed to take Zoe.

She leaves Jim a Rebreather, which contains a hidden laser knife inside.

Maddy, Josh, and Elisabeth check in, go through security, and head towards the dilated time portal.

Jim is seen in the plaza, apparently of high security, to get to Terra Nova.

He gets paid assistance getting a certain bag in. He is also seen on camera, breaching a restricted area on his way to the gate. The officers standing by are informed and stop him on the path, where they ask him to come with them. He elbows the guard's face, steals a gun, and runs into the gate to follow his family.

After the Shannons are reunited after walking through the time portal, a soldier almost runs a knife through Jim's bag and Zoe is discovered hidden in it alive with a rebreather, successfully brought in despite what they were told was allowed.

The tenth pilgrimage has to walk through a path to Terra Nova, and Zoe comments on the sky. Jim is unsure if she remembers him, but is later reassured when she calls him "Daddy".

After entering Terra Nova for the first time, the tenth pilgrimage is greeted by Commander Nathaniel Taylor. He speaks to Jim and Elisabeth, allowing them to keep their family of five for a fresh start, as Elisabeth wanted. Jim is assigned to the agricultural detail.

The family settle into their new home but Josh makes it clear that his father's actions caused a lot of tension for the family while he was in prison. During their bickering they realize Zoe has wandered off and panic.

Outside, a mystified Zoe approaches something - a brachiosaur feeding on some ferns near the fence. She picks up some of the dropped ferns and gets the idea to feed the dinosaur with the ferns, which it accepts. Both her mother and sister are fearful when they find her being picked up with the leaves, only for Zoe to let go of the leaves and drop back down with a happy laugh at her new playmate.

Josh and Maddy are heading towards the Orientation Meeting when they meet Skye and her friends (Tasha, Max and Hunter). Josh decides to explore Terra Nova with Skye. Maddy prefers to learn about their new home by attending the orientation meeting.

Skye and her friends take Josh into the jungle, "Outside The Gates" (OTG). Skye and Josh jump from the Snakehead Falls. Near the waterfall Skye shows Josh rocks which feature what appear to be golden-colored symbols carved into the stone. Skye says Taylor has forbidden anyone to visit this area.

The pilot was filmed filmed over 26 days in late November to December 2010 in south-east Queensland, Australia.[1] The shooting was slowed down by heavy torrential rain. Because of these setbacks, the pilot itself cost between $10 and $20 million.[2] Additional material had to be shot in 2011 because the team was short on material.[3]

The DVD contained a number of deleted scenes from the show. All but one were cut from the pilot.

Mido Hamada was credited as a star for this episode. He has not appeared again.

Jim arriving at the Shannon home in 2147

The Shannons at Hope Plaza

The Shannon family reunited after they crossed the Portal

The Shannon meet their new home in the colony

Josh and Maddy gaze at the probe

Behind the Scenes Edit

WELCOME TO TERRA NOVA!
Message
Add a photo to this gallery