"Empirosaur"[1] (fictional species) is used by Sixers wielding fire to attack Terra Nova. It is labeled the "biggest dinosaur on record" here, although many sauropod dinosaurs, including the brachiosaurs of Terra Nova, are larger (it was likely meant to be called the largest carnivorous dinosaur of all time).

In the episode "Nightfall", after Mira learned the colony had no power and no working weapons, the Sixers attempt to herd it to the gates of Terra Nova, attacking while the colony is near-defenseless, planning on using it as a distraction so they could steal the box. Jim and Taylor manage to withstand the attack by using flaming arrows that ignited a line of flammable material outside the walls. The empirosaur is driven off and does no damage to the colonists or Sixers. 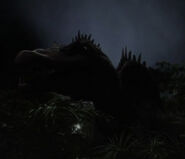