Dr. Elisabeth Shannon is the wife of Jim Shannon and the mother of Josh Shannon, Maddy Shannon and Zoe Shannon. She is a trauma surgeon on the Terra Nova medical team, and arrived on the Tenth Pilgrimage.

Elisabeth was an acclaimed trauma surgeon in Chicago and graduated at the top of her class from Northwestern University. Before her husband was taken away to prison after attacking officers, she and her family had been hiding and taking care of her third child. She smuggled a laser knife inside a Rebreather7000 for Jim, so he could break out of Golad Prison and escape to the Portal. It is known that she has a sister that she left back in 2149.[1]

Elisabeth arrived on the Tenth Pilgrimage and is working as a doctor in Terra Nova, while still taking care of her family. She was surprised to see that her old classmate/boyfriend from medical school, Malcolm Wallace, was also working at Terra Nova, and later found out that he played a large role in her recruitment.

Elisabeth and Taylor went to investigate why communications with Outpost 3 had been lost. There they found the personnel infected with an unknown pathogen, causing them to partially lose their memory. Elisabeth became infected and lost her more recent memories, believing she was still in medical school. She attacked Malcolm and Jim when they arrived, but was calmed by Malcolm, who she believed she was still dating. Elisabeth examined what evidence was available, and with help from her husband, she was able to discover a cure. ("What Remains")

Elisabeth examined Leah Marcos, a young Sixer girl, then offered to look after her for a short while. Maddy accompanied Elisabeth to the infirmary as part of an internship, though she, unlike Elisabeth, was unable to stomach this type of work. Elisabeth performed an autopsy on Ken Foster. When Zoe became interested in a damaged Ankylosaur egg, Elisabeth performed Innovo-surgery on the egg to save the young dinosaur. When Hunter Boyce came to the infirmary with stomach pain, Elisabeth discovered he was infected with a Taroca parasite, and had to surgically remove it. ("The Runaway", "Bylaw", "Nightfall")

Elisabeth helps Jim investigate who stole Azimeth from the infirmary, hoping to retrieve some for a sick patient. Elisabeth later helped Zoe make a fake beard for her role as Commander Taylor in the harvest festival play. When Jim dug up an unidentified skeleton in the jungle near Pilgrim's tree, Elisabeth examined the corpse. Jim brought a blood drop belonging to the Sixer spy to Elisabeth for analysis. However, it was partially dissolved in some paint sealant and had to be removed first. ("Proof", "Vs.", "Now You See Me")

Elisabeth is a caring wife and mother, and will do anything to protect her family, even if it means putting her life or career in danger. She played a large role in helping Jim escape from prison so he could join the family in Terra Nova. Elisabeth is hardworking and dedicated, much like her husband.

Elisabeth had been in a relationship with Malcolm Wallace in medical school, but it ended because he did not want children. When Jim found out about the old relationship, Elisabeth told him they only dated for "half a minute." 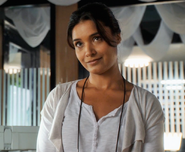 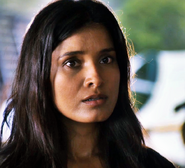 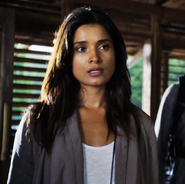 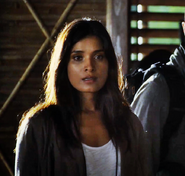 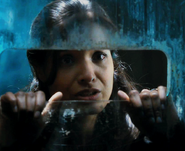 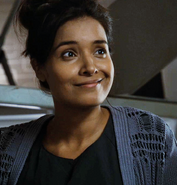 Psychiatric Evaluation Elisabeth Shannon 005
Add a photo to this gallery