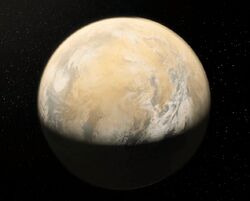 Earth is the only habitable planet in the Solar System.

The exact cause of the environmental devastation has not been identified, and in this interview with executive producers René Echevarria and Brannon Braga, Echevarria comments "we kind of kept the causes of the environmental problems deliberately undefined", and Braga says "we wanted the audiences to infer their own calamities. If you're a global warming fanatic, fair enough. If you think there is going to be a nuclear war, fair enough. It's really not the point. The point is that we were our own undoing and we screwed up. So we're going back to not screw up a second time."

The entire planet has a brownish hue, although there are areas that look somewhat darker and more blue that seem to correspond to the location of present-day oceans, suggesting that the brown color is due to a layer of smog (and dust from dustbowls and deserts that used to be fertile farmland and wilderness) rather than because the oceans have disappeared. Also, in "Nightfall", there is a scene where holographic display of The Eye rapidly scrolls through the appearance of the Earth from the present day to 2149, it does not appear that the oceans are retreating but that the whole planet is becoming more brown-colored.

By the 22nd century, it has become so damaged by pollution and war that humans needed to wear rebreathers whenever outside due to the large amount of carbon dioxide in the air. The Moon was also no longer visible, as it had been covered up by all the smog from the cities. Plant and animal life had become increasingly rare due to the extreme pollution. The majority of the world's population lives in crammed housing, while some of the wealthier citizens have retreated into domes that block out most of the pollution.[1] Because of the recent wars, it is also possible that there is danger of radiation in some areas.

Many governments are dealing with very little stable infrastructure and have programs in place to help the less fortunate. However, in some cases such as the Montana dust bowl they have to abandon their work and redirect their efforts elsewhere.[2] Some governments have also been alleged to cover up disasters such as a Cholera epidemic in Miami and destroy any evidences.[3]

The collapse of environmental areas led to collapse of certain factors of society, 70% of the United States is unemployed,[4] there is an estimated 800,000 homeless people in the United Kingdom[5] and cities such as New York are so overpopulated that governments are urging citizens to leave.[6] Many people require help from the government either in the form of stimulus packages, such as those in Italy for couples who remain childless,[7] or food from food distribution centers.[8]

85 million years ago, the Earth was still green and abundant with flora and fauna, so humans traveled into that time to establish there and give humanity a second chance. 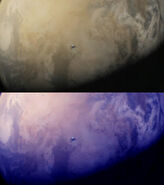 Bottom version has adjusted contrast and colors, so that the difference between the oceans and the continent is more clear

Earth of 2011 as seen in holographic display of The Eye

Retrieved from "https://terranova.fandom.com/wiki/Earth?oldid=25684"
Community content is available under CC-BY-SA unless otherwise noted.