Curran was a member of Terra Nova's security team.

Curran indirectly killed Ken Foster, another member of the security team, by luring him to a communications station with a Nykoraptor inside, because he owed Foster a large sum of money due to gambling he was unable to pay. He was then banished from the colony by Nathaniel Taylor. ("Bylaw")

After finding an extinguished campfire that could only be from Curran, Taylor tracks him down to find him with a leg wound given to him by an ancestor of the Komodo Dragon that bit him while he was trying to set a snare. Taylor tells him that it will track him from a distance until Curran is too weak to fight back. Taylor fights off the Komodo when it tries to kill him and then offers Curran the option to come back to Terra Nova in exchange for joining the Sixers and spying on them to uncover who the traitor in Terra Nova is. ("Proof")

Curran successfully infiltrates the Sixers, and later rescues Skye's mother from the Sixers' camp and gathers a sample of the medicine for Sincyllic Fever. Taylor officially makes it clear that Curran is once again allowed back into the Terra Nova colony. ("Within")

After the agreement between Curran and Taylor in the woods, Curran takes it upon himself to keep his word. He successfully infiltrates the Sixer camp, identifying the location of their camp and bringing home Skye's mother to the settlement. Though his past crimes have marred his reputation, it seems that Taylor is willing to give him a second chance. 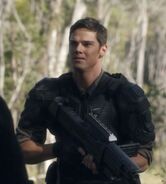