Carnotaurus is a carnivorous dinosaur that appears in Terra Nova.

In the episode "Instinct", Casey Durwin offers to sell Josh Shannon a guitar. When Josh refuses, he offers to throw in a pick he claims he "painstakingly carved from a carno's tooth". When Josh sees that Casey has no legs, Casey informs him that the tooth was not from the Carnotaurus that took away his legs.

In the episode "What Remains", a member of the Science Team stationed at Outpost 3, Dr. Jonathan Guagenti, became infected with a virus that caused memory loss. He wandered outside the facility after becoming disoriented while chasing a green beetle, right into the path of a Carnotaurus. He was then eaten by the dinosaur, which left only his feet and boots.

In "Nightfall", Carnotaurus is listed by Reynolds among dinosaurs that could be deterred by the scent of leaves and mud, or alternatively by Slasher dung.

In "Resistance", the people of Terra Nova sneak a juvenile Carnotaurus back to Hope Plaza, where it wreaks havoc.

Carnotaurus can run extremely fast, easily fast enough to keep up with the vehicles used by colonists and Sixers.[1] They sometimes attack in pairs, a pair of them being seen attacking Sixers in "Genesis: Part 2".

Moments before eating a Sixer 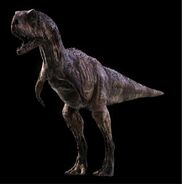 The Juvenile Carnotaurus
Add a photo to this gallery
Concept art

A male and a female, created by Dan Katcher

Retrieved from "https://terranova.fandom.com/wiki/Carnotaurus?oldid=25852"
Community content is available under CC-BY-SA unless otherwise noted.