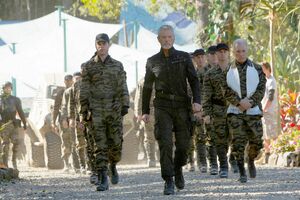 "Bylaw" is the fifth episode of Season 1 of Terra Nova. The colony is a victim of its first murder, and Jim and Taylor must find the perpetrator. In addition, Skye agrees to help Josh find a way to reunite with Kara, his girlfriend of 2149, while Zoe is mesmerized by an Ankylosaurus that hatches after Elisabeth performs surgery while the animal is still in its shell.

The episode begins with a member of the Terra Nova Security Team, Foster, approaching Communications Relay Station 19-A. Upon opening the door to the station, a Nykoraptor just inside the station attacks Foster, killing him.

Jim asks Elisabeth to examine Foster's body, and oddly, she finds the blood of a gallusaur, a Nykoraptor's favorite prey, on him. Jim deducts that someone used a gallusaur as bait to lure the Nykoraptor into the station, so it would be there to kill Foster when he arrived.

Meanwhile, Malcolm discovers an Ankylosaurus egg near the communications station that had not been destroyed by the Nykoraptors in the area. Zoe pleads with her mom to make the egg hatch. Malcolm and Elisabeth are both surprised to find that the embryo inside is still alive. Unfortunately, however, Malcolm discovers that the egg has not hatched already because of a defect to the dinosaur baby, which has caused its leg to be fused to the back of its neck. They also can not hatch the egg themselves, because the baby would die due to the condition it is in. Using the advanced medical equipment, Elisabeth performs surgery through the shell of the egg to fix the baby's leg, which should allow the egg to hatch normally.

Jim and Alicia Washington begin the search for Foster's murderer. At Boylan's Bar, Mark Reynolds informs them that Foster had been in a relationship, but Mark did not know who the woman was. He says that Foster kept pictures of the woman on his tag. Jim and Washington find that Foster's tag is missing, but when they attempt to track the tag to find its location, they discover that the tag is on the move: the tag must be inside the Nykoraptor that devoured Foster. A team tracks down the Nykoraptor and subdues it, then removes the tag from its stomach. After viewing the pictures contained on the tag, it is determined that the woman is Rebecca Milner, a married woman. They question Rebecca at her house, but she denies having an affair with Foster. However, her husband, Howard, walks in at that moment, and tells Jim and Washington that Rebecca did indeed have an affair with Foster, and that he had killed Foster himself.

Taylor now faces the decision of imprisoning Howard, or banishing to the jungle outside the gates of the colony. With most or all of the colonists in attendance, Taylor announces that he has decided to banish Howard. Howard is sent out of the settlement with his belongings and a gun. But Jim then has suspicions over whether Howard was telling the truth over killing Foster himself, or if Rebecca possibly killed Foster and Howard was covering for her. Jim tracks down Howard in the jungle and tells him he does not believe that he killed Foster after all. Jim smuggles Howard back into the colony so they can have a talk with Rebecca. To Howard's surprise, Rebecca states that she did not kill Foster either, and they had broken up a few weeks prior because Foster liked to gamble excessively at Boylan's Bar. While researching Foster's financial records, Jim and Washington find that someone had owed Foster a lot of cash.

Boylan is then arrested for hosting illegal gambling and skimming off some of the winnings for profit. But when asked if he killed Foster, he denies doing so. Jim is angry to see that Josh is working at Boylan's bar. He makes Josh quit since he had kept it a secret. The security team conducts a search at the bar for the financial records of the card games, but the search turns up nothing.

After Taylor questions Boylan, it is reported that Boylan has escaped into the jungle. Members of the security team head out into the jungle to hunt for Boylan, with Jim, Taylor and another security team member, Curran hunting together. Taylor then surprisingly begins questioning Curran on the killing of Foster, and then reveals that Boylan had not really escaped. Boylan had provided them with information that Curran had owed Foster a large sum of money. Curran defends himself, saying he didn't kill Foster, but Taylor continues to hound him. Curran finally has enough and pulls his Sonic Rifle on Jim and Taylor, but it fails to fire, as Taylor had it disabled prior to leaving the colony. Taylor wrestles Curran to the ground and opens Curran's jacket, finding the financial records from the bar. Taylor banishes Curran on the spot, and Curran heads off into the jungle, without even a gun.

Jim lets Josh return to work, but reminds him that their family does not keep secrets. Josh and Skye then follow Boylan's directions to meet with Mira. Mira tells Josh that she can help get his girlfriend from 2149, Kara, to Terra Nova under one condition: he must agree to perform an undefined task for her sometime in the future, without question when the time comes. Josh agrees, and Mira sends them back on their way to the colony.

Back at the settlement, the Ankylosaurus egg finally hatches. Zoe pleads with her parents to keep the hatchling, and they agree to keep it for the time being.

Elisabeth performs an autopsy on a soldier while Malcolm looks on