The brachiosaur is a sauropod dinosaur found near Terra Nova.

They were first seen outside Terra Nova's gates in the episode "Genesis" when Zoe Shannon wandered away from home. A herd of them were browsing near the colony's wall, and Zoe fed them some of the branches they had dropped. During an overhead shot the herd was seen by Commander Nathaniel Taylor and Jim Shannon.

One also appeared in "What Remains", when Commander Taylor encountered one at night while he made his way towards the colony from Outpost 3. However, due to the fact that his memory had been altered by a virus, he dismissed the Brachiosaur as a hallucination, not being able to remember going back 85 million years through the portal.

A herd of Brachiosaurs was seen along with some pterosaurs in the beginning of the episode "Proof".

Two Brachiosaurs browsing on vegetation in Devil's Canyon were mistaken for Sixer activity by Terra Nova's military in "Within". Jim Shannon described the "Sixers" as "fifty feet tall, gray, and very hungry".

Weaver notices a Brachiosaur browsing on the treetops in the valley as the Phoenix Group prepares to clear the land for mining. Weaver took his gun and shot it dead. Lucas then informed him that they were harmless.

Brachiosaurs are very large herbivores,[1] and the only creature seen as of yet that rivals them in size is the gigantic Spinosaur, Empirosaur. They sometimes appear to feed in groups during the day as in "Genesis", while one is seen wandering alone at night in "What Remains". Brachiosaurs appear to live in large herds. Males are larger and more brightly colored than females.

Two Brachiosaurs in "Within" 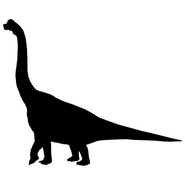 Retrieved from "https://terranova.fandom.com/wiki/Brachiosaur?oldid=25851"
Community content is available under CC-BY-SA unless otherwise noted.