View source
watch 01:36
We're Getting Mutants in the MCU - The Loop
Do you like this video?
Play Sound

Ankylosaurus is a herbivorous dinosaur that appears in Terra Nova. It is best known for its protective armor and massive clubbed tail, which it uses to fend off predators.

Dr. Jack Horner revealed that this animal is not a member of the real-life genus Ankylosaurus because that genus lived 20 million years later. It is meant to be a closely related genus that lived 85 million years ago. Therefore, they give it a little different morphology than the real Ankylosaurus. The spikes and head shape are a little different.[1]

In "Bylaw", Malcolm Wallace retrieves an abandoned and damaged ankylosaur egg from the nests. He takes it to the Research Laboratory and discovers that the reason the young dinosaur never hatched was because, in a prenatal deformity, its leg became fused to its neck. However, they were surgically separated in the hospital and the young ankylosaur was saved, eventually hatching. The Shannon family decided to keep it, for a time.

It finally reappeared in "Now You See Me". At this point, Zoe was told that she had to let the creature go or it would never be able to survive in the wild. Although she had become very attached to it and tried to smuggle it out of the lab, she eventually was convinced that letting it go was the best thing to do. After it was released, it cried out loudly, and caught the attention of an adult browsing nearby. The adult accepted the hatchling as its own.

Ankylosaurs build nests during the breeding season consisting of large branches. Their eggs are laid in these nests, but Nykoraptors will still sometimes raid them. The herds do not remain in the breeding grounds after the eggs hatch. Ankylosaurus eggs are large and green, with darker green speckles on the shell. 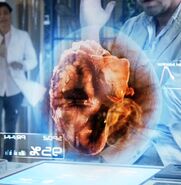 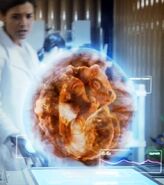 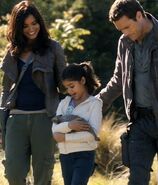 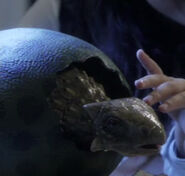 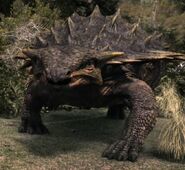