Andrew Fickett was a scientist shown impersonating Ken Horton in the episode "Proof".

As shown in a biographical file viewed by Maddy Shannon in The Eye, Andrew James Fickett was born January 16, 2090, in the United Kingdom. 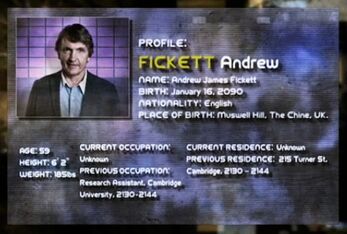 At some point Andrew became the assistant for the famous scientist, Ken Horton. Andrew would go on many research missions with him, but no one remembered him. This was in part because he claimed that Ken would steal information and research from him and pass it off as his own. Andrew grew jealous when Ken was recruited to go to Terra Nova but he wasn't. Andrew, wanting to become "the perfect Ken Horton" killed Ken, mutilated him, and left his remains in a park. He then hired "facers" to change his appearance to look like Horton, and stole his identity.

Andrew came to Terra Nova disguised as Ken Horton with the Fifth Pilgrimage to conduct research in the wild. He left on an expedition 6 months before the Shannon family arrived. When he returned, it became clear that he wasn't fully read up on what the real Horton knew.

He allowed Maddy to become his apprentice and study the various rock and plant samples that he and his research team had gathered. He also discovered a type of beetle that could help eat the mold killing the apples in the colony's orchard. He refused a brain scan from Elisabeth Shannon as it would likely reveal that he was not the real Ken Horton. He later found out that Maddy was suspicious of him. He took Zoe Shannon into the apple fields after he caught Maddy researching him. Maddy followed him, and he then captured her, tied her up and was about to unleash a poisonous spider on her before Jim showed up and punched Andrew unconscious. His further fate is unknown but he likely was thrown in the brig.

Retrieved from "https://terranova.fandom.com/wiki/Andrew_Fickett?oldid=17660"
Community content is available under CC-BY-SA unless otherwise noted.