Lieutenant Alicia Washington (commonly referred to as "Wash") was the second-in-command to Nathaniel Taylor and a member of the Terra Nova security forces prior to her death. Washington has been referred to as a tough and relentless kick-ass. She is also "focused, sassy, and dry." She is a recurring character on Terra Nova and is portrayed by Simone Kessell.

In 2138, Washington served and fought with Nathaniel Taylor in Somalia. Washington was wounded and was evacuated while Taylor searched for his missing wife.[1]

On an unknown mission, Washington operated on Taylor on the battlefield, putting 67 stitches in his side.[2]

She isn't known of having family back in the old world.

Alicia was part of the Tenth Pilgrimage escort from the exit of the Time Portal to the Colony.

Alicia was the teacher for the survival skill lessons. She helped defend the colony after a meteor explosion caused an electromagnetic pulse and disabled the colony's technology. While Taylor was tracking the Sixer spy, she helped to chase the dragonfly that the spy was using to communicate with the Sixers. Washington helped Jim strengthen the colony's defenses and install a security camera. While viewing the security footage, she saw Skye sneaking out of the colony.

Alicia was left in charge of the Colony when Taylor went out to escort the Eleventh Pilgrimage back. Unfortunately, mercenaries, known as the Phoenix Group, attacked the colony. After they shelled the colony and killed 26 people, Alicia surrendered.

Alicia was then confined to Boylan's Bar where everyone could see her. After getting a Phoenix soldier drunk, Alicia then helped Jim Shannon and his family escape to join Taylor's remaining forces. Alicia set off an explosion at a munitions hutt. Alicia was then brought before Lucas Taylor. Alicia was killed by Lucas by a gun in the season finale after refusing to reveal Taylor's position. Lucas gave her three seconds to tell him where his father was, and when she said "You know you have your father's eyes," he shot her in the head at point blank range.

In "Occupation-Resistance", she saved the Shannon family and was then killed by Lucas Taylor with a gunshot to the head at close range.

Wash was tough and strong when it comes to doing her job, but she also follows Taylor's orders without question. She was very loyal to the defense and rules of the colony, but she will twist them if she needs to.

Commander Taylor and Lt. Washington had a close friendship that goes back multiple years.

She became friendly with Jim Shannon, later working with him to mount a resistance against the Phoenix Group.

It is hinted at that Wash and Commander Taylor were more than just friends, however this was never confirmed 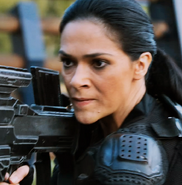 Retrieved from "https://terranova.fandom.com/wiki/Alicia_Washington?oldid=25676"
Community content is available under CC-BY-SA unless otherwise noted.