The Acceraptor, otherwise known as the "Slasher", is a fictional species of dinosaur that has colorful feathers, and a whip-like bladed tail capable of cutting a man in half.[1] Members of the species are usually dormant during the day, but are vicious pack hunters at night.

In "Genesis", they attacked a group of teens, including Josh Shannon and Skye, who had gone out to distill homemade moonshine in the woods. A Slasher's tail blade (severed, of course) was used to cut "fruts", which the teens were using to make moonshine. According to Skye, their teeth are sharper, though this could be an opinion. It is possible they are more resilient to bullets, as the gun fire had less of an effect on them than other creatures. They hunt in packs, calling others to their aid.

In "The Runaway", it is mentioned that Leah's father was killed by a Slasher.

In "Nightfall", Slasher dung is said to be an alternative to a mud-and-leaves combination that keeps away Nykoraptors, Carnotaurus, and Acceraptors.

In "Vs.", a Slasher was suggested by Jim Shannon to have possibly killed an unidentified body, before it was discovered through an autopsy after being shot.

In "Now You See Me", a young male and female Slasher staking out breeding territory attack Mira and Taylor, presuming the humans to be competing with the dinosaurs for territory. Mira and Taylor escape over a waterfall, but the Slashers return that night. The male is lit on fire by Taylor after being hit by a spear from Mira. Both Slashers fled. 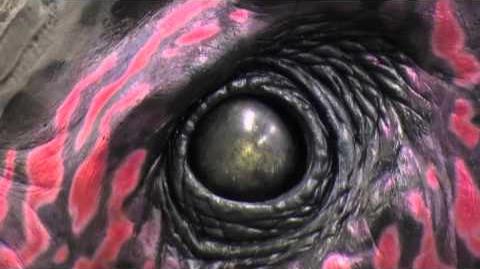 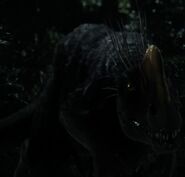 A thermal view of two Slashers.

The claws of the Slasher, by John Cox's Creature Workshop

A male Slasher is attacked by Taylor

A male and female Slasher

Concept art from Cretaceous Life: The Dinosaurs of Terra Nova